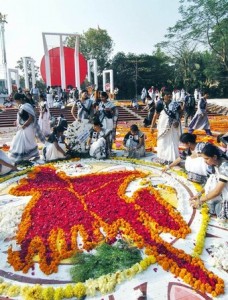 Bangladeshi students decorate the ground in front of Shahid Minar (Martyrs’ Monument) during Language Day celebrations in Dhaka, 21 February 2007. Tens of thousands of mourners thronged the memorial in remembrance of those killed in a police massacre in 1952 during a protest over the Pakistani government’s decision that Urdu would be the country’s only language despite its Bengali majority. AFP PHOTO/Farjana K. GODHULY (Photo credit should read FARJANA K. GODHULY/AFP/Getty Images)